The story of the lake

The lake has come into being as a result of gravel mining during 15 years, since the middle of the 70s. The anglers of the town and the surrounding villages started planting the water up – by not methodically planted fishes – and fishing yet during the procession of mining. Fishes got into the water in a natural way too: by the overflow of the Kerka and by birds. In this way the natural fish stock of the lake has been developed. From line-fishing aspects the lake functioned as “wild water” even till the beginning of 2002.

The permanent, rich, flowing run-off -due to the intensely flushing sprigs-, the significant, here and there 4-6 metres deep – and excellent quality water made the intensive settling of fishes possible. The 6-hectare surface lakes in beautifully trimmed environment offer visitors and anglers services of high standard. Due to the systematic planting nobody leaves disappointed, anglers mention the lake repeatedly as “The Paradise of Anglers”. It is open every day. Summer time anglers are allowed to fish even at nights as well.

OTHER FISHES ARE FORBIDDEN TO TAKE! When measuring, the price of fishes should be rounded off one hundred gramms!

Small trolley for transporting equipment can be rented, which costs 300 HUF / day / piece.

The biggest part, which is 4 hectares, resembles a distorted brick (lake No.1). Depth of the water: 2-3 metres, but certain pits reach the 4-6 metres’ depth. Depth of the water steeply falls. Its bank is covered with reeds and bulrush. The second part (lake No.2) is the smallest one (approximately 0,5 hectare), which can be regarded a part of a bigger lake, because the 2 lakes are connected with a 3-4 metres wide dyke. Above the dyke a beautiful wooden bridge guarantees passing. Depth: 2-3 metres. The third part (Lake Record) is separated from the other two lakes. Through a narrow constriction rich flow passes toward the big lake. Its surface is about 1,5 hectares, soundings 2-3 metres but along its west shore there is a 4-5 metre – deep pit. There are significant springs in the lake. There is no natural inflow in the lakes; depth of the water is affected by the groundwater, the all-time soundings of the Kerka, the springs and rainwater. Thus depth of the water in the lakes can be regarded constant, yet, change of water even happens.

In the REKORD LAKE are fish placed over only 5 kilograms.  In the lakes are continuously minimum 35 tons fish. Are present in large numbers from 10 to 15 kg carp and grass carp, and from 5 to 9 kg pike. Largest catfish caught in 2014 was 33 kg. 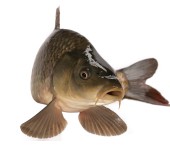 As a result of former plantings, among the plant- eaters, there are fishes of 8-10 kg, mainly carp and amur; due to them angling is of special experience. A great number of carps of 5-15 kg were planted into Lake Record.

Among white fishes bodorka and red- winged bream play an important role mainly as nutrient; apart from these there are a lot of breams, silver-and gold crucian and, due to the plantings, tench in the lake. There are about 30. 000 kg fishes in the lake.

Of predatory fishes, Zander, was planted into Lake I, while in Lake Record there are mainly predatory fishes. The pike colony is wonderful, fish of 8-9 kg can even be found; zanders are smaller, but due to the favourable living conditions there are a lot of them in the lake.

In 2007-2008, catfish were also installed in the lake, which, thanks to the good living conditions rapidly growing. In 2014 the largest catfish caught was 33 kg.

In the company of carp, bream, bodorka , tench and gold crucian were planted into Lake I. and Lake II. These fishes can adjust themselves to different conditions both in deeper and higher water. Their progenies serve as nutrients for predatory fishes and catching them is a delightful experience for anglers. On the other hand, it is a great opportunity for our indigenous rare fishes, tench and crucian, to start off a self-supporting colony.